“Thank you for starting the greatest conservatory. It's a smashing success...and that our girls get to participate is the greatest thing of all!! ” – Britani Underwood, Parent 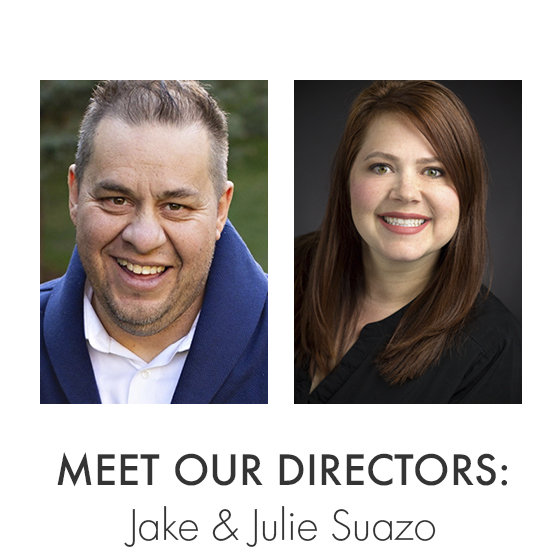 Julie Suazo: Julie has performed and created theater for over 20 years. She holds a BS degree in Theatre Arts from Utah Valley University. While at UVU, Julie was nominated for an Irene Ryan Award 4 times and competed at regionals.  She concluded her time at UVU with her Senior project performance of Much Ado About Nothing (Beatrice). During her time at UVU she taught youth theatre and directed youth full stage productions for 5 years at Scera Youth Theatre and Utah Valley University summer youth programs. Film credits include Voteutah.gov commercials (wife) and Love, Fall and Order for the Hallmark Channel (mayor). Her favorite role of all time was Mrs. Jennings in Sense and Sensibility at the Orem Hale Centre Theatre. Creating and teaching acting is my passion!

Jacob Ben Suazo: He has twenty years of stage directing and producing experience. Was a founding member of the Warboy Theatre Projects and Thrillionaires Improv Musical Theatre. He has 20 years of improv teaching experience. Was a member of Comedysportz for 15 years and has studied improv with Improv Olympic, The Groundlings. The Impro Theatre and Second City. He currently adjuncts at Utah Valley University where he teaches acting for stage and film and has developed and established their improv courses and improv team.

The acting class is designed for children and teens interested in preparing for and pursuing commercial and live theatre opportunities. Industry experienced instructors guide students through the differences in acting for stage and film so that they are prepared and well-versed to take on a variety of experiences. Weekly training challenges students physically, imaginatively, and emotionally through activities that develop confidence while also gaining experience through regular in-class and public performances. Utah COPA students have gone on to receive roles in major local, regional and national stage productions from Sundance, to Broadway, to Disney.

Enrollment: Open. No audition required.
Ages: For ages 9 to 18